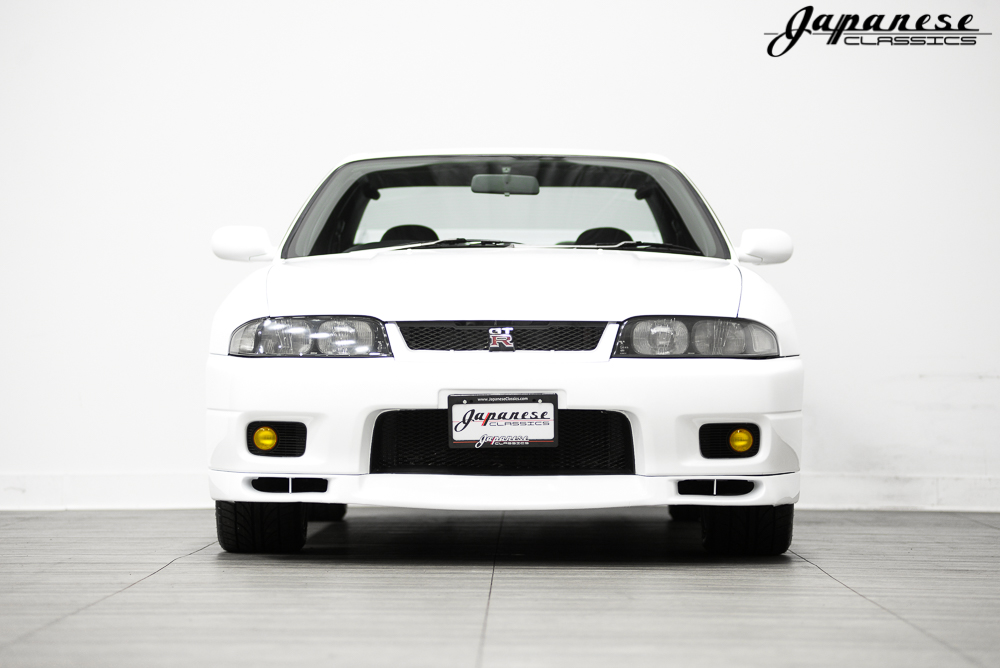 While the R33 GTR isn't completely new to us here stateside, they've only just become legal to import based on the 25-year rule. Previously you had to jump through a ton of hoops and costly modifications that very few shops were authorized to perform. Finally, we can bring them over and enjoy them the way Nissan had originally intended. The evolution of the R32 took all the best aspects and improved on them making an absolutely magnificent driving machine. While the looks can be a bit controversial, it's hard to deny that its the most underrated of the GTR family. While the Cloud White (QM1) may not have been the rarest color option available, it sure is one of the most sought after. When you actually see the car in person it becomes clear just why so many people are looking for these. White just seems to accentuate the wider bodylines giving the GTR such a more muscular profile than the regular GTS25-t. With 127K verified miles the paint is in great shape overall with only a few small blemishes from stone chips over the years. Bodywise the car is in equally good condition with really only a few small door dings that any 25-year-old car is bound to accrue. Since this one has been kept basically stock you get one of the best set of factory wheels ever designed. The 33 GTR wheels look good on just about anything, especially the car they were actually designed for.

While the body is in great shape the interior is in even better condition. The interior of the R33 is a serious step up over the outgoing R32s. For instance, the plastics used throughout the interior hold up much better, and thanks to the design get rid of the typical bubble that's so common with the R32s. The newer style 33 GTR seats are a great upgrade over the lesser models offering great support while being comfortable enough for a good road trip. Both driver and passenger have been spared from any severe staining or seam separation, and even the typical bolster wear from getting in and out. Per usual, the back seats look nearly new considering they're really only good for a short trip in a pinch or more than likely just extra storage space. The carpeting and door panels are great and don't seem to suffer from some of the more typical delaminations that the R32s did. The only deviation from stock comes by way of a fantastic leather Momo wheel that looks nearly new. Surprisingly, you can even say the same thing about the factory knob which is typically one of the more high wear items. Above the newer Kenwood headunit is the trademark GTR center stack of gauges for your boost gauge, oil temp, and a torque gauge. Since these are predominantly a rear wheel biased AWD system the torque gauge tells you how much power is being sent upfront when the system detects any slipping. While performance is the GTRs main strength they didn't skimp out on the interior amenities. The automatic climate control system is easy to use and the A/C is still kicking for these few remaining warm days. With fall quickly approaching you'll probably rather roll around with the windows down listening to the RB26DETT do what it does best. Power mirrors were also standard however the folding feature isn't functional.

Under the hood is Nissan’s acclaimed RB26DETT which we all know and love. The motor makes gobs of torque and pulls like a freight train, and that’s just in stock trim. Throw some performance bits on it and you’ve got a real monster on your hands. This one has been kept pretty much all stock, just like the rest of the car. The exhaust has had some help though thanks to an HKS Super Dragger catback. The stock exhaust does this car no justice so it's a much-needed improvement. Even at idle the exhaust has a fantastic rumble that will certainly turn heads when you pull up to cars and coffee in the morning. The straight-six fires right up with the twist of the key and has no issues pulling all the way to its 8K redline. Shifts through the 5-speed are crisp and rewarding and have zero issues putting the power down to the ground. While speed is good, you need to be able to reel it back in so Nissan equipped the GTR with Brembo brakes with ABS. The factory suspension is more than enough for a spirited drive out on the backroads. The ride is a bit more firm than you find on the RB25 cars but certainly isn't what you'd call aggressive. Once touching down here we have gone ahead and brought all the service up to date. The biggest job is the timing belt and water pump which will be a huge relief for its new owner. The more routine items like the 4 new tires, a fresh battery, spark plugs and fuel filter ensure that you're good to go. There really aren't many JDM cars with as much clout as the GTR. Not only are they notoriously capable, but they're also surprisingly comfortable at the same time. Whether you're looking for a full-on build or a weekend head-turner, you can't go wrong with a GTR.

*California Residents: In order to register a Grey Market vehicle in the state of California then it will have to be made CARB complaint first. CARB certifications will have to be performed within the state. Depending on the vehicle and any existing modifications will affect the pricing. Typically CARB compliance will range between 5-10K. Additional information can be found on the California Air Resources Board website.