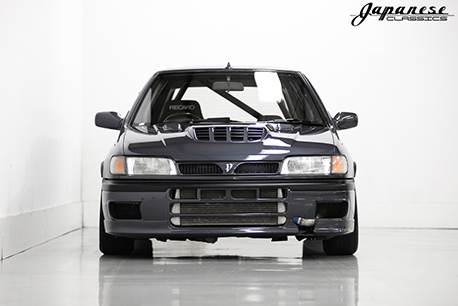 Built as Nissan's Group A rally introduction, the Pulsar was a purpose built to be a street legal race car. Based on WRC regulations a street legal version would have to be produced in order to enter competition. The public received two different models; the RA which had all of the creature comforts, and the RB which was the stripped down factory race model. The homologated model (RB) was stripped-down as a base for motorsport use, particularly the Group N rally series. Unnecessary weight was shed by removing the A/C, Power Windows, and ABS, saving a little under 100lbs. Due to Nissan's incredibly limited production, over the years the RB has become the more sought after model. There were only around 9600 series one Pulsars built to begin with, and merely 600 RB's. To add the cherry on top there were only a scant 45 built in Nissan's Blueish Gray (TJ1). With only 67K verified miles the body has been kept up rather well over the years and kept mostly all stock from an aesthetic perspective. The lower bumper had to be trimmed slightly in order to accommodate the massive HKS front mounted intercooler piping, otherwise it's an all factory layout. The paint looks fantastic, and the body has only collected some minor door dings from driving over the years. To keep up with the rally aspirations a set of GAB coilovers were installed but unlike most cars we see, the ride height was kept close to stock to allow for ground clearance. A period correct set of Volk Racing Group AV 15x7 wheels replace the stock ones and look right at home.

The interior on the car is all business. A considerable amount of additional weight was shed from the interior leaving only the dash and room for two. A fixed back Recaro bucket replaces the stock seat in order the keep the driver planted through the roughest of terrain. Both seats show really well, free of any notable stains or tears. The same can be said about the dash, which is crack free and well preserved. It has been modified a bit to house some additional gauges to compliment the factory ones. The steering column has a mechanical Tomei AFR and Blitz Dual SBC boost controller. Below is a HKS turbo timer and off to the right of the driver is an Omoni water temp gauge. Surrounding the driver is a full bolt in cage which has been integrated rather well with the dash. In order to aid with weight distribution the battery has been relocated to the rear.

With such purpose driven looks you're going to need something under the hood to back it up. Factory equipped with a longitudinally mounted SR20DET paired up with a WRC appropriate ATTESA all wheel drive system. A good deal of additions have been added to help safely build upon the already impressive SR20. The enormous HKS fmic can't be missed, which replaces the factory top mount intercooler which was so prone to heat soak. In keeping with temps down a large Earl's Oil Cooler is mounted behind that as well as an oil relocation kit to help make routine changes easier. To the right of the engine bay is an aluminum catch can, all of which are plumbed with AN fittings and braided stainless lines. Beneath the heat shield is a M's intake feeding the factory turbo. Additional chassis bracing has been added with front and rear strut tower braces. To round out this pocket rocket a full custom exhaust setup was built from the turbo back. The exhaust sounds killer, and isn't too overbearing. Considering the interior has been stripped of all sound deadening it is definitely noticeable in the car, then again this car wasn't built with the intention of being a grocery getter. The RB specific close ratio 5 speed pairs well with the quick spooling two liter. The clutch is heavy, and engages quickly, leading us to believe it has been upgraded as well. This car is not for the faint of heart, it was built to move and boy does it. The turbo spools quickly and pulls hard to redline. For those looking for a rare piece of Nissan history than look no further than the GTi-R.

*California Residents: In order to register a Grey Market vehicle in the state of California then it will have to be made CARB complaint first. CARB certifications will have to be performed within the state. Depending on the vehicle and any existing modifications will affect the pricing. Typically CARB compliance will range between 5-10K. Additional information can be found on the California Air Resources Board website.